Introduction: NMDC Ltd is the largest iron ore mining company in India and has produced 34 million tonnes of iron ore for FY17. This production is achieved with the help of its 4 fully mechanised mines -2 mines in Chhattisgarh and 2 mines in Karnataka. NMDC is government promoted company recognized as a Navratna PSU where 75% of stake in company is held by government.

1. Volume Growth To Drive Profitability: NMDC is largest iron ore mining company in India having a very consistent track record in mining operations. However, NMDC has little influence in determining Iron Ore price as it is affected by the global demand and supply dynamics.

Considering the Indian demand of Iron Ore and in order to maintain its focus on profitability despite price volatility, NMDC has slowly expanded its Iron Ore production capacities. In FY17, the company has registered its highest ever production and sales of 34 million tonnes and 35.6 million tonnes respectively. NMDC has also maintained its sales growth in first two months of FY18 as well and is expected to increase the overall production over the next few years. NMDC is further set to increase iron ore production from its Karnataka mines if the Supreme Court increases or lift the mining cap on iron ore production.

3. Augmenting Capacity along with Developing Required Infrastructure: In order to achieve the production of 67 million tons of Iron Ore by FY22, NMDC is:

5. Monetisation of Steel Plant: NMDC has principally decided to sell its new constructed 3 MTPA steel plant at Nagarnar in Chhattisgarh for which they have appointed an investment banker to find a suitable buyer. So far, NMDC has made a capex of Rs. 13000 crores on the steel plant and expects to realise minimum Rs. 14000 crores from the same. This plant still requires certain amount of capex to become fully operational for which the work is going on. The timing of the sale of steel plant cannot be estimated; however, there is a strong possibility of it finding a suitable buyer. Whenever it happens, the sale of steel plant will generate large free cash flow for the company which they may utilise for rewarding the shareholder in the form of higher dividend or one more buyback as company does not require any fresh fund to expand its current mining business.

6. Strong Balance Sheet and Higher Dividend Payout: NMDC is a debt free PSU and has Rs. 5300 crores of cash and equivalent on Balance Sheet. This is even after successfully completing its buyback of Rs. 7528 crores in FY17 which reduced its paid up capital quite significantly by 20.2%. NMDC is known for constantly rewarding its shareholder through dividends and buyback of shares. NMDC has been maintaining a very strong dividend payout as can be seen below:

7. No More One off in FY18: NMDC has provided certain one-time expenses on account of provision for closure of certain mines. It includes provision of Rs. 259 crores under MMDR Act 2015, expected credit loss of Rs. 257 crores and write off of investment in subsidiary of Rs. 42 crores totalling to Rs. 558 crores of one time provisions in FY17. As a result of which the profits of NMDC were lower in FY17. However, we expect such one offs will not come in FY18.

Valuation: At the current market price of Rs. 119, NMDC is trading at 37650 crores market cap with Rs. 5300 crores of cash and equivalents on balance sheet and has a dividend yield of 4.3%. In FY17, NMDC did an operating profit of Rs. 3400 crores and assuming the current price of Iron Ore, NMDC should be able to achieve an operating profit of Rs. 3800 crores. In addition to this, the company has spent Rs. 13000 crores on upcoming steel plant completely from its internal accruals which is not yielding any returns so far. The value of steel plant if sold can yield nearly Rs. 13000 crores of free cash flow to the company. Together, value of steel plant and cash on balance sheet works out to be at Rs. 18300 crores which is nearly 50% of current market cap. Considering its operating profits, strong balance sheet comfort from cash and its steel plant, large reserves of ore and increasing production plan, NMDC seems to benefit substantially from the Indian demand of steel and subsequently Iron Ore. We therefore recommend buying at current market price of Rs. 119. 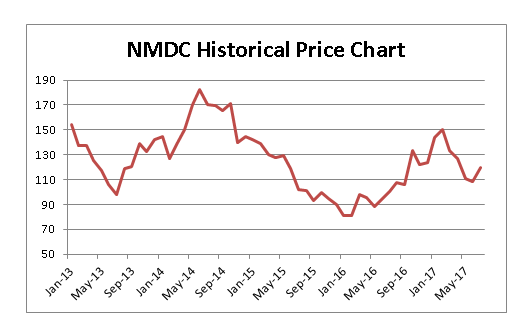 Dhruvesh Sanghvi is a Research Analyst registered with SEBI having registration No: INH000000875.

Definitions of Rating system:
1. Explanation of Type of Report
2. Explanation of Time Horizon: All the Fresh Recommendation reports in the investing section have a view of 3-5 years.
3. Explanation of Views: Views can be any one among these - Buy, Buy on Dips, Hold, Sell Partial, Exit